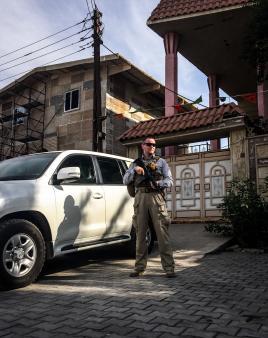 The most successful period of his career has been spent on Training department of Emergency Motorized Unit of the Police of the Czech Republic – Prague.  With the help of his colleagues and the support of the then commander of the unit he founded and had the opportunity to prepare a complete and very successful training system and methodology for this unit.

Zdenek has both worked and trained on many missions around the world, such as Iraq, Afghanistan, UAE, USA , Italy, Finland , Spain , Bulgaria, Latvia and Slovakia. During these missions he has gained valuable practical experience that he can now pass on to students on our courses.

During his career, he has written, worked on, and created several training manuals and films, including a series of DVDs featuring Tactical Shooting operations, actions & intervention against active shooters and the advanced use of the H & K MP5 for use in both basic and advanced tactical intervention.

Zdenek is also dedicated to, and has excelled in, sports shooting.  Between 2009 and 2011, he received several national shooting honors, such as the Shooting Master of Police of the Czech Republic in 2010. This year his team won two gold medals in the disciplines of Team Competition and Combat Shooting. In 2009 he achieved the gold medal in the Police Category and again won in the Team Competition of 2011. His competitive shooting career culminated with a Bronze Medal in Individuals and a Gold Hat-Trick in the Team Competition at the Masters Level of the ‘Police of the Czech Republic Shooting Competitions’. At the international level, he won a Bronze Medal in shooting at XVIII International Police Games 2009.

During his police career he has won a total of five prestigious medals and awards. Two Meritorious medals and in 2011 the”Regional Director of Police Medal” for saving a human life. This award resulted in him being named “Policeman of the Year – 2011 Regional Directorate of Prague” in the category “Act of the Year”. In 2012 Zdenek won the highest possible award for Officers of the Minister of the Interior and Chief of Police when he was recognized as “ Police Officer of the Year of the Czech Republic’ for saving human life.”