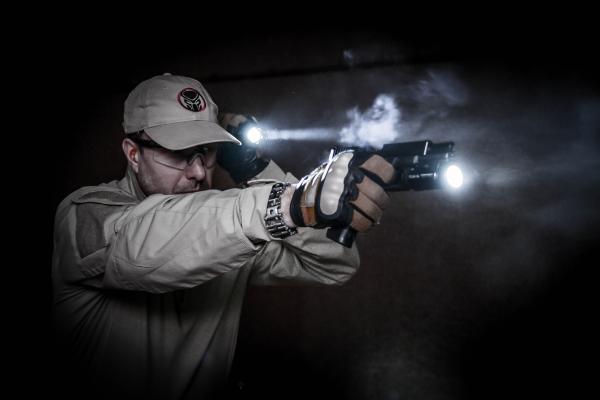 Milos Müller began to seriously address the issue of combat and self-defense tactics in 1987 and in 1991 obtained a firearms license to facilitate this training.

He seriously started to deal with defense shooting in 1992, when he met with a number of enthusiasts, future and today’s professionals. he became professionally acquainted with people who, at that time, were experienced staff, members and officers of the units dedicated to the protection of constitutional officials. From these professionals he learned the basics of not only technology, but also the philosophy of defense with firearms. It was a turning point that started Milošová career as a shooter and later an instructor.

At that time, he also began devoting more and more time to competition shooting. He always was drawn to the more dynamic shooting disciplines. Eventually he focused on IPSC shooting and defensive shooting under the rules of IDPA respectively, AOS CR and the like. Competition shooting was always perceived as an opportunity to check your shooting skills in terms of speed, gaining experience and taking the opportunity to see and compete with the best. He began to expand his knowledge and abilities at an increased rate. The result is that he began a long and successful run in the Czech Republic with many notable achievements at national and international level, such as championships and vice-champion Czech Republic in the IPSC disciplines, champion of the Baltic countries in IPSC and other medal positions.

In 1993, he joined the Prague City Police. m. Prague. Here, through regular patrols and service operations with the MP unit, he also worked in 1996 as an instructor of shooting and tactical training, where he served until 2012. He has been working as a contractor in the PSD team in Iraq since that time.

Over the years, he gained experience in courses focused on professional training, use of weapons in defense as well as courses on various combat systems focused primarily on self-defense. Many of the skills and experience he gained from continuous contacts and consultations with colleagues and other instructors in the armed forces and members of the special forces, which draws it tactics directly from real conditions of their service. Very valuable information and experience was also gained from his friends & fellow police officers and special teams instructor living in the USA. His many years of experience in the service of special services, from fighting in the Middle East, are an invaluable source of information.