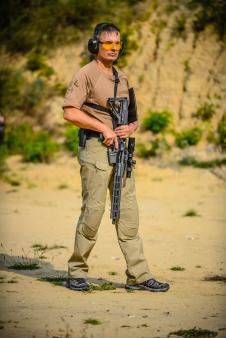 After completing the mandatory military service, Miloslav has started his long career with the Police of the Czech Republic in 1995. His first position was patrol officer and later he became instructor at the Special Anti-riot Unit. In 2001 and 2002 he worked as an instructor of the Department for the Protection of Witnesses of the Police Czech Republic. In 2002, Miloslav returned to the Special Anti-riot Unit and joined the Special training group, where he served until 2008 as an instructor of shooting, tactical and special training.

Since 2008 he has been engaged in his own business activities in the area of ​​training and teaching weapon handling, security and consultancy services, professional lecturing activities, special techniques in the field of Property Security. In the recent years he is focusing on Active shooter training in the form of seminars, courses and exercise for the governmental and private institutions.

During his police career Miloslav was responsible for the preparation of Special Police Units who were used against the threats causing mass disruption in the public order (IMF, NATO). He was responsible for creation of technical and tactical plans to ensure public safety and organize anti-terrorist protection of the important objects/buildings (US Embassy, ​​Radio Free Europe, the headquarter of the Jewish religious community, Prague Congress Center) and other security measures (Czech Presidency of the Council of the EU, visits of US presidents – Bush, Obama, Pope JP II), etc.